Finland is one of those countries, where the forest school movement has been rising in popularity in the recent years. In the last 10 years, some 30 forest schools have been established. Most of these are pre-schools that cater for 5-6-year-olds, who spend most days of the week or the most hours of the day at a specific, dedicated natural area, usually a forest.

Tammela forest pre-school school  is one of these schools.

A bit before 9 am I arrive at the school where the group is preparing to leave. The kids leave the daycare and kindergarten facilities around 9.00 Tuesday through Friday, and they stay to play, learn, eat and move around in the forest until 12.30 when they walk back to the school. In the afternoon the kids either stay at school or are picked up by parents, grandparents or the school taxi. Mondays are reserved for tasks that require a computer or writing and that would be more difficult to accomplish outside.

The walk to the forest school is approximately 1 km, and it gives the kids a good practice about traffic safety, as they have to walk next to the road.

The kids arrive to the main school building with their outdoor gear (weather fitting clothes, shoes and head wear) on. The parents have been well informed at the start of the year, they have visited the site to see what their kids will be up against and have equipped their 5-6-year-olds well. That´s important, as cold and wet can cripple the play.They put on their  yellow reflector vests to be more visible on their walk. The kids are accompanied to the forest by kindergarten teacher Mia Kaseva, who has just started her first year in the forest, though not her first year in the kindergarten, Leena Vasama, the brain and heart behind this forest preschool, and an intern.

The kids grab some things they need at the forest school site, and start their walk in a row.

As we arrive to the forest, the kids take out their reflector vests and backpacks and hang them in a small wooden shelter at the entrance of the forest school site. Rather than allowing the kids to run around free immediately, the teachers have a message to share with them. It turns out, the teachers have witnessed a few “border crossovers” the day before and now it´s time to go through the forest school borders once again. According to Leena, this happens only at the beginning of the year, when the kids are not yet used to the border markings. Later on, they can remove the markings as everyone knows and obeys the borders. 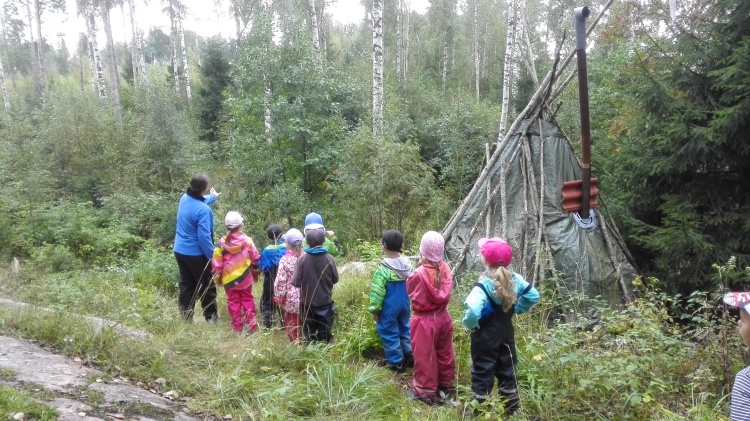 The kids are free to take off to their favorite activities – playtime! Most kids run to grab the shovels. Leena tells me that until last year, they didn’t  have any “toys” at the site. The saws, knives, hammers, and other tools were their only equipment which were used to build and repair, also by the children. The kids were fine without the toys and used sticks and stones and other natural materials that were molded by their imagination.

There are altogether 11 kids playing around the area. As for the ideal number of children, Leena has a quick answer. Ten is perfect, 11, maybe 12, is doable but any more makes it difficult to keep an eye on the kids and to ensure their safety, as well as to fit them in the “Himmeli”, their little shelter house where they spend some time in the winter months when it is really cold (somewhere below  minus 20 degrees Celcius). 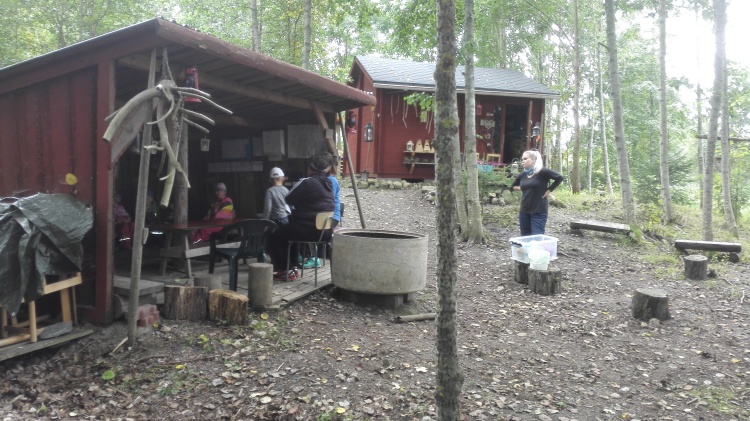 The forest school has been popular from the beginning. There has been 17 kids some years ago, even 19 kids, but that was clearly too many. However, this year, there are only 11 kids. Though for the forest school this is a perfect amount of children, Leena is worried. There´s been a dramatic drop in birthrate in the recent years in Tammela and the municipality is seeing more people leave (move or die) than be born.

The school has been through some difficulties of their own. When the forest pre-school first started in 2009, the shelter they had for them was an old army tent fit for many people. However, when the Tammela preschool got a new building in a new location, the forest preschool was in jeopardy as there was no nearby forest next to the new school to accommodate the schools forest class. However,  Leena didn’t let the idea die but went around scoping out possible locations near the school, and asking the landowners for their consent. And she managed to find a spot at the border of three different landowners. Luckily, all of the landowners were willing to give the parcel for free for the use of the school for a number of years. However, since the headmaster had other priorities than keeping the forest pre-school going, no funds were made available for establishing a new forest school.  Leena mobilized the board of the parents, the local entrepreneurs and finally was able to raise enough money and materials to build a winter warm shelter  which was erected with the help of the parents, a composting toilet and a laavu-shelter for year round daily use.

After some playtime, it´s time to gather the kids for a morning snack – some bread with butter and a drink of water. They eat this in the laavu and then start discussing the calendar. They talk about the seasons and the signs that tell it is the end of the summer. After this, they collect their seat cushions and grab some writing equipment and make their way to the rocky outcrop that is bathing in the sun. The kids sit down in a row and with the lead of Mia, they continue their work around the theme of drawing a birch tree. They also practice writing the word “summer (kesä)”. There is no bickering, everyone has their spot, everyone is heard. And everyone is concentrating in their own work.

In the meantime, Leena shows me around the compound. The tepee turns out to be a wood burning sauna which the children have built themselves. Here the kids take a sauna sometime, a detail exotic to some, but  common in the Finnish culture from which the sauna originates. All materials of the sauna as well as everything on the compound is recycled or received as a donation. Or “begged for” as Leena puts it.

Leena has no problem begging for things. She loves her work. Both teachers especially love the effect being in nature has on the children. First of all, “it doesn’t rain in the forest”, say the kids. Secondly, there´s room to play and the days go fast.  The teachers have seen impressive developments in some kids with learning difficulties  who have already been made a plan to follow special education and who have miraculously been cured after some months in the forest pre-school. These children calm down and their concentration skills improve. In addition, the teachers see the kids find their place in a group immediately as they engage in their own games and plays in the forest. No one is left alone.

As one of the main comments from the parents, Leena mentions, is that the parents have a lot of their own time back in the evenings, as the children, who arrive home from the forest school want to engage in calm, solitary activities like drawing or flipping through books, or playing games. Gone are the difficult evenings where children refuse to go to bed, as their appetite is healthy they are ready to go to sleep after a a day in the fresh air and physical exercise outdoors.

But are the kids really outside all the time? Yes. Only in the winter, they gather inside the Himmeli to eat and to do some tasks. But even then, they stay outside. Only if the weather turns very bad, e.g. dangerously stormy, they stay inside or do not come to the forest site at all. In the winter, there is no “freezing limit”, the kids go out as they want, even when it´s -25 degrees Celsius or colder. There is a fire burning in front of the laavu warming up that shelter, as well as in Himmeli. And that, along side constant movement that being outdoors inspires, seems to be enough to keep the kids warm.

At around 11, the food arrives. The food comes from the central kitchen, heated, and is dropped off at the side of the road, where the kids have dropped off the dishes from yesterday just this morning.

Today we eat spaghetti casserole, watermelon salad and some crackers and water. Luxurious, if you ask me. And everything tastes delicious in the outdoors.

After eating, the kids run out to play a bit more. Some are balancing on the tree trunk, some are playing  on a raft while others have collected a lot of snails and made a kindergarten for them.

The kids gather around for one more game they have asked Mia if they could play. Then it´s time  to start wrapping up and get back to the school where some kids stay until later in the afternoon before they are picked up. At the forest, the kids put their reflector vests on and form a line. “See you tomorrow””, they say, as they wave goodbye to the forest. Their forest.